It’s the lunar new year for a number of Asian cultures, and across the world people are celebrating the arrival of the year of the pig (or, in some places, the year of the boar).
What significance do pigs (or boars) have astrologically, and how does that stack up to the correspondences that Swedenborg described?
In the Chinese zodiac, 2019 is the year of the pig (or, in Japan and other places, the year of the boar). It’s the last animal in the cycle of twelve zodiac signs in Chinese astrology. According to legend, that’s because when the Jade Emperor called for a great meeting of the animals, the pig was the last to arrive. For that reason, in Chinese culture, sometimes pigs are thought of as slow or lazy. 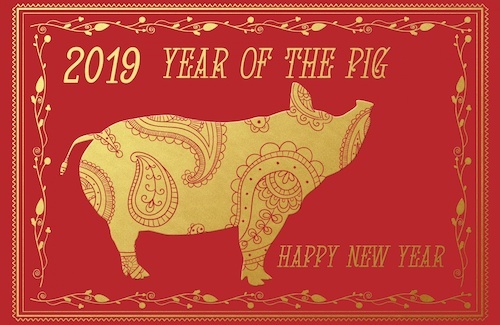 People born in the year of the pig, however, are said to have much more positive characteristics. (Because the zodiac is on a twelve-year rotation, you’re considered a “pig” or “boar” person if you were born in 2007, 1995, 1983, 1971, and so on.) A person whose zodiac sign is a pig is generally thought to be industrious and hard-working, enthusiastic, and full of zest for life, if occasionally a bit materialistic.
In Swedenborg’s system of correspondences, pigs are also associated with material things, but in a much more negative way. When describing evil spirits who spend their lives indulging their self-love and materialism, he writes:

They act like the demons that the Lord was casting out of a madman, who in terror for their lives begged him to send them into some pigs (Mark 5:7–13). These demons had been sordid misers during bodily life, as can be seen from the fact that in the other life they seem to themselves to spend their lives among pigs. The life of a pig corresponds to greed, which makes such a life pleasing to them . . . (Secrets of Heaven §1742:3)

Boars don’t fare much better in the world of correspondences. Swedenborg often lumps them in with other wild animals that represent out-of-control impulses that get in the way of our spiritual growth.
But Swedenborg does show his lighter side when pigs come up during a conversation with some spirits in the afterlife:

As they were laughing over this, I joked with them in various ways, and I reported to them that I had seen adulterers looking also like pigs. I also recalled then the story of Ulysses and Circe, how she had sprinkled Ulysses’s companions and men with Hecatean herbs and touched them with a magic wand and so turned them into pigs—“into adulterers, perhaps,” I said, “because by no art could she have turned anyone into a pig!” (Conjugial Love §521:4)