The chair of Harvard’s astronomy department makes the controversial speculation that an object from outside our solar system could be evidence of extraterrestrial life.
Is there life on other planets? It’s a fascinating question . . . one that Swedenborg also weighed in on during his lifetime.
For the past few centuries, human beings have looked to the stars for signs of extraterrestrial life, but the numerous sightings and theories over the years have yet to produce any objective evidence. Recently, though, Avi Loeb, the chair of Harvard’s astronomy department, made waves with his argument that we may have experienced indirect contact with this long sought-after intelligence. 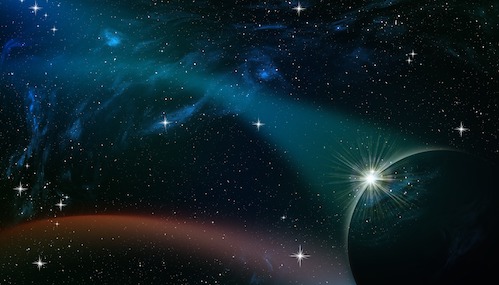 On October 19, 2017, Canadian physicist Robert Weryk detected the first interstellar object to pass through our solar system. Using the Pan-STARRS telescope at the Haleakala Observatory in Hawaii, Weryk spotted what has been dubbed “‘Oumuamua” (Hawaiian for “scout”)—a small object whose dark color resembles that of objects in the outer reaches of our solar system. In an interview published this month in The New Yorker, Avi Loeb stated that the object’s unusual acceleration suggests that it has to have originated from outside of our solar system and that it “may [even] be a fully operational probe sent intentionally to Earth’s vicinity by an alien civilization.” Needless to say, this is a very controversial perspective to hold in the scientific community, let alone in the human community.
Could ‘Oumuamua in fact be an advanced technology that was sent on a mission across the universe? Loeb argues that the existence of extraterrestrial life is inevitable given the sheer number of stars and planets that exist in our galaxy alone. More than two hundred and fifty years ago, Emanuel Swedenborg made a similar argument for extraterrestrial life—with a spiritual twist:

[The immensity of our universe] must be a means of achieving the ultimate purpose of creation, which is a heavenly kingdom in which the Divine can dwell with angels and with people [still in the physical world]. . . . A means so vast for a purpose so great was not brought into being so that a single planet could then produce the human race and the heaven it populates. How would that satisfy the Divine, which is infinite, for which thousands or even millions of planets full of people would amount to so little a thing as to be almost nothing? (Other Planets §4)

So if we can take in the vastness, remain open to the possibility, and have faith that we may someday understand that which is beyond us, maybe we too can venture into the unknown alongside the likes of Swedenborg and Loeb.
Other Planets, which is available as a free download from our bookstore, contains Swedenborg’s visionary experiences of life outside of our own planet. For a brief and entertaining introduction to this work, check out the “Other Planets Promo” created by the team at Swedenborg & Life. And for better insight into Swedenborg’s spiritual journeys to other planets, join Swedenborg & Life host Curtis Childs as he travels through space in our previous episode “The Spirituality of Aliens.”