When eighteenth-century scientist and spiritual teacher Emanuel Swedenborg studied the complex imagery of the book of Revelation, he found that it didn’t represent a physical apocalypse but a spiritual enlightenment. He learned this through the principle of correspondences, which states that physical experiences and objects reflect spiritual truths.

In this episode, hosts Curtis Childs and Jonathan Rose look at his experiences to find the hidden meaning of the four horsemen of the apocalypse—and the transparency that they truly represent. After all, you can’t address a problem until you know about it. 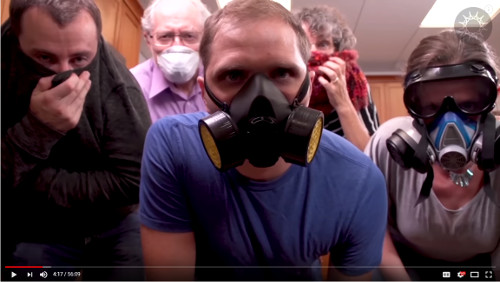 The Dilemma and the Hero

This section of Revelation begins after the description of the Throne Room (which we covered in a previous show) and with a book no one seems to be able to open.

This book corresponds to our true selves, which can only be revealed by the Lord. John grieves that it won’t open, but even that has meaning.

The reason John grieved at heart was because all would otherwise perish. Indeed, if everything in heaven and on earth had not been put back into order by the Last Judgment, the case could not have been otherwise. (Apocalypse Revealed §263:1)

The stakes here are high—if no one can open the book, then it could be the end for all humanity. Fortunately, a hero appears: a figure that is referred to as a lion but who appears as a lamb. The hero, of course, is God. In the aspect of a lion, he is the one who came to this world as Jesus to conquer hell and put the world back into balance. The lamb represents the loving, tender side of God; and the fact that it appears as if slain means that the people of that day were rejecting him: 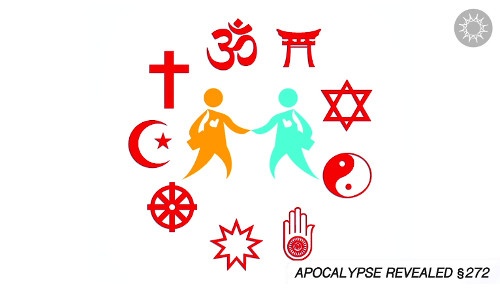 The Lord is said spiritually to be slain, when the truth is denied and the good is rejected, these being from him; among these [people] also he is not acknowledged; for [a person] who denies and rejects those things that are from him, also denies and rejects him, for the Lord is with [people] in his own truths and goods. (Apocalypse Explained §315:2)

The verse also refers to spirits that accompany the Lord. They correspond to the truth of the Lord spreading across the world. That means there are many paths to divine love and wisdom.

The opening of the book, then, is the opening of our selves, which allows God to look into us and help to expose the parts that might need work. These truths can be uncomfortable, but they always lead to something better.

A Golden Crown; A Destructive Sword

The four horsemen of the apocalypse are often depicted as four identical figures, but the actual passage describes different horses with radically different riders. 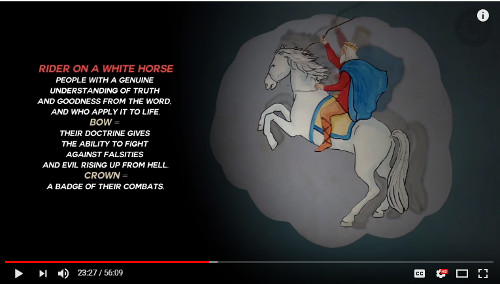 Each rider and horse represents a different way of understanding sacred texts. For instance, the rider on the white horse has a positive correspondence: people who have a genuine understanding of goodness and truth from the Word and who apply it to their lives.

The rider on the red horse, however, is said to have been given the power to take peace from people on earth and cause them to fight each other. This represents what happens when spiritual teachings aren’t applied to life. 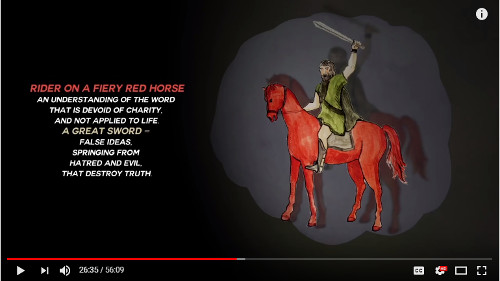 In us, the white horse can represent our ability to learn and grow, while the red horse shows what happens when love doesn’t guide us. It shows that transparency doesn’t have to be a bad thing; when we become more aware of the “white horse” inside us—the part that wants to live a spiritual life—we can also be more aware of how to feed it and help it thrive.

A Pair of Scales; Death and Hell

The second two horses represent mindsets much worse than the ones before.

The next rider sits on a black horse and holds a scale, and a nearby voice speaks of the price of wheat and barley and instructs them not to harm the oil and wine. Kind of strange, right? 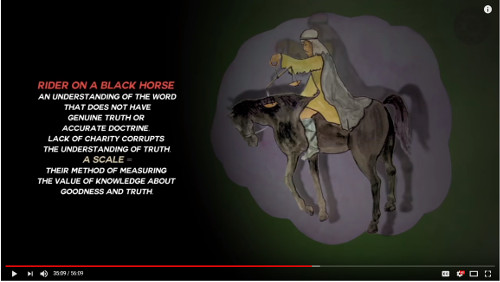 The black horse corresponds to people whose understanding of sacred scripture lacks any true spiritual understanding. They are so lacking in love that they are incapable of perceiving the truth.

[A] voice said, “A quart of wheat for a denarius, and three quarts of barley for a denarius; and do not harm the oil and the wine,” which symbolically means that because the value these people placed on goodness and truth was so little as to be scarcely anything, provision had to be made to keep them from violating and profaning the sacred goods and truths that lie hidden interiorly in the Word. And the Lord provided this by their at last knowing not any good and so not any truth, but only evil and falsity. For people who know goods and truths can violate them, indeed profane them, but not people who are ignorant of them. (Apocalypse Revealed §314)

In other words, a little true knowledge can be very damaging to someone who is bent on destructive goals. Here we see that even for people who have rejected true teachings, God is still trying to guide them to the best possible outcome that they can achieve.

The rider on the pale horse is explicitly named as Death in the biblical passage, and it is further said that “hell followed with him” and that he is given authority to kill a quarter of the people on earth (Revelation 6:8). The pale horse represents a mindset that’s entirely devoid of goodness and truth. The rider’s name is Death because death corresponds to a complete lack of spiritual life, meaning that the person is so far disconnected from heaven that they are inevitably bound for hell. 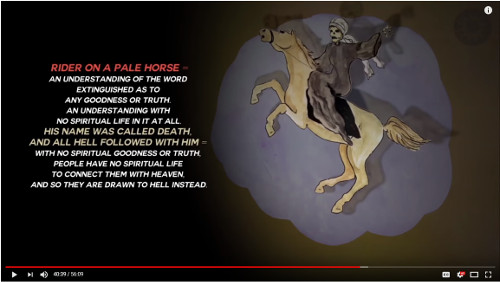 And power was given to them over a fourth of the earth, to kill. This symbolizes the destruction of all good in the church. . . . With sword, with famine, with death, and by the beasts of the earth. This symbolically means, by doctrinal falsities, by evil practices, by self-love, and by lusts. (Apocalypse Revealed §§322:1, 323:1)

All of the practices represented by the tools of the fourth horseman can be truly damaging and dangerous to us spiritually.

In our inner lives, the black horse can be seen as representing a state of apathy—a total lack of interest in leading a better life, even if we go through the outward motions of following a spiritual tradition. The pale horse is a step beyond that; it’s a state where we reject spirituality in all its forms and dedicate ourselves totally to the pursuit of pleasure and self-aggrandizement.

In the wrap-up, we’re reminded that the real lesson of the four horsemen is that the Lord can give us the clarity we need to reveal real issues and overcome them.

The truth revealed by this clarity is meant to be useful, which means it needs to be grounded in love.

How come the Bible says the Antichrist will reign on Earth before Jesus’s return if there is no Satan?

We have an ongoing series of episodes on the meaning of the book of Revelation. In order:
“Revelation: Vision of a God-Centered Life”

“The Meaning of the Book of Revelation: 7 Churches”

“The Meaning of the Book of Revelation: The Throne Room”