To kick off the new year, we’ll be going through the works of eighteenth-century theologian Emanuel Swedenborg. In this episode, hosts Curtis Childs and Jonathan Rose go live to explore one of Swedenborg’s most influential works, Secrets of Heaven.

Have you ever had the inkling that something spiritual might be influencing you?
Jonathan sometimes feels like the thoughts or ideas that seem to pop into his head out of nowhere must be coming from some spiritual force. Sometimes they’re positive, sometimes they’re negative, but they definitely feel like they’re coming from outside of him.
Curtis thinks of Swedenborg’s assertion that heaven and hell are always close by and affecting our minds. Understanding this helps him notice how and when his mind is under spiritual influence.

When Swedenborg learned about the spiritual world, he did his best to capture and share everything he learned. He put this all in a huge volume called Arcana Coelestia, which translates from Latin to mean Secrets of Heaven.
The fundamental premise of this work is that the Bible contains hidden spiritual meaning. This meaning can actually reveal much about the true nature of the spiritual world and our reality. Through “correspondences,” which are living symbols for spiritual truths, almost everything can be understood through the Bible.
Secrets of Heaven was his first published theological work, written from 1749 to 1756. 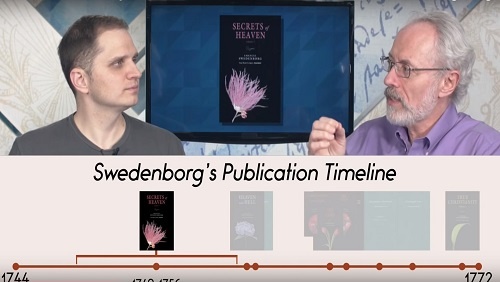 In it, Swedenborg provides detailed analysis of the books of Genesis and Exodus interspersed with his own spiritual experiences and his high-level understanding about God and the universe. He even offers the reader the essence of the book in its very first lines:

The Word in the Old Testament contains secrets of heaven, and every single aspect of it has to do with the Lord, his heaven, the church, faith, and all the tenets of faith; but not a single person sees this in the letter. In the letter, or literal meaning, people see only that it deals for the most part with the external facts of the Jewish religion. The truth is, however, that every part of the Old Testament holds an inner message. (Secrets of Heaven §1)

To get a closer look at what Secrets of Heaven has to say, we’ll do a deep dive into three key passages that explore some of its recurring themes. The first idea is that spirits and angels have a strong connection to our own human experience.

The source of perception, inner dictates, and conscience needs to be understood. Because no one these days knows anything about it, let me say a little. It is entirely true that the Lord governs us through spirits and angels. When evil spirits start to take control, angels put their effort into deflecting evils and falsities, and conflict results. This conflict is what we sense by means of perception, an inner dictate, or conscience. From these three sensations, and from the trials we are going through, we would see clearly that spirits and angels are present with us if our focus were not thoroughly physical. Such a focus prevents us from believing anything we hear about spirits and angels. Body-centered people could experience those conflicts a hundred times over and still claim that an overactive imagination or some kind of mental illness lay at the root of them. I myself have had the opportunity to experience conflict and its vivid sensation thousands upon thousands of times—almost continually now for several years. I have been able to learn what spirits were involved, what they were like, just where they were, at what moment they approached, and what time they left, and I have been allowed to speak to them. (Secrets of Heaven §227)

Another concept that Swedenborg brings up quite a bit is the phrase “as of self,” which refers to those times when you feel that you’re doing something on your own when in fact it is coming from the Lord.

Spirits newly arrived [in the spiritual world] absolutely rack their brains trying to understand the idea that we cannot do what is good or think what is true on our own but only from the Lord. They believe that this would make them machines, incapable of anything, and that if so, they may as well drop their hands and let themselves be pushed around. “No,” they are told, “you really have to think, will, and do good on your own. Otherwise you wouldn’t be able to develop a heavenly sense of autonomy or heavenly freedom. But you still ought to acknowledge that what is good and true comes not from you but from the Lord.” All angels, they are taught, make this acknowledgment and even live in the perception that it is so. The more keenly they sense that the Lord leads them and that they therefore live in the Lord, the freer they are. (Secrets of Heaven §2891)

Think of this like moving your arm. You will your arm to move, but you don’t know all the inner workings and muscles that make it work. Goodness and truth flow through you, but you have to let them flow.
Finally, Swedenborg does a good deal of redefining and contextualizing commonly accepted terminology. In the case of worship, he upends what we usually take it to mean.

In a brand-new segment, Curtis and Jonathan explain Swedenborgian concepts in just one minute or less.

At the beginning, we asked when you felt spiritual things were influencing you. Here are some of the answers.

“The Angels and Evil Spirits With Us”
“Genuine Worship” (Short Clip)
“God Didn’t Create Us to Be Robots” (Short Clip)
“How to Feel the Presence of Angels”
“Who Was Swedenborg?”